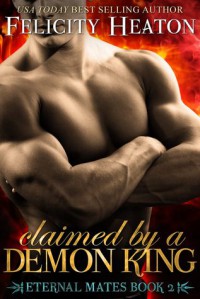 I loved every second of Claimed by a Demon King. The characters were funny and lovable, the plot and action were intense, and the love story worked so well! I can’t wait for more from this series!

Sable is so tough – she’s a hunter for Archangel, a human company that hunts demons that disobey Archangel’s rules, and as Claimed by a Demon King begins, she’s taking on her toughest assignment ever: leading a group of elite human hunters into a demon realm to fight alongside Demons, Elves, Werewolves, and Vampires. She’s not just physically though – she’s also emotionally tough. She’s been through a lot in her life and she’s overcome it marvelously. And, as Claimed by a Demon Kingprogresses, her past starts to rear it’s head – and raise a lot of questions. Questions Sable would rather not face and answers she doesn’t know what to do with. She handles it with such strength and determination. And yet, somehow, she’s so marvelously vulnerable. She’s scared to open up – even to her best friend, Olivia – and to trust in anyone besides herself.

But Thorne, the Demon king, is determined to make Sable trust him. I loved Thorne more than all the characters. He was, for me, like a mix of the Hulk and Shrek – because I picture this big, hulking demon and yet he’s so lovable. To be clear, despite my comparisons, he’s not green. From what I pictured, he mostly looks human, but he has these big horns that grow and curl when he’s angry or aroused. And he has claws and wings that can pop out of his back or retract. So maybe mostly human is an exaggeration. Anyway, Felicity knocked it out of the park with Thorne. He melted my heart so many times over. He knows that Sable isn’t going to be easily won and certainly not in his demon way of force – so he sets out to woo her. And he tries so hard, it’s just so adorable. And he gets that it’s the little things, sometimes. Like coffee in a demon realm where there’s nothing familiar to eat or drink. Oh and did I mention that he has been waiting to find his mate so he’s a virgin? When is the man ever the virgin? Right!?! It was a nice twist. And he lost his parents at a young – for a demon… so like 700 years old I think – age, but still visits there statues regularly to talk to them. He clearly loved them. *Sigh* I fell in love with him and was eager for Sable to love him, too.

The story was, in my opinion, also much stronger than in Kissed by a Dark Prince. Thorne has called on all these races – Elves, Weres, Vampires, and even Humans – to help him save his kingdom. These races don’t easily mix, so there’s tension there from the start. The preparations for battle as well as the actual moments of fighting were the perfect balance for the love story that was always at work.

Sable is Thorne’s eternal mate – and as a Demon, he can ONLY have children with his fated, eternal mate. So in a way, this is soul mates and love at first sight. But Felicity does such a good job of making the characters work for that love, that you easily forget that there was any form of insta-love involved. Thorne has to woo Sable, who is determined to fight her feelings for him. And then there’s Bleu – who has been interested in Sable since Kissed by a Dark Prince. There’s the question of whether or not Sable might also be his eternal mate – because that could happen – or does he just want her? Again, even though it’s essentially a love triangle, Felicity wrote it so well, I didn’t hate it. I loved it and I wasn’t left with that icky feeling that love triangles so often leave me with.

Although lots of elements from Kissed by a Dark Prince reappear in Claimed by a Demon King, the book could definitely be read as a stand alone. Personally, I recommend reading both to fully appreciate some of the plot elements and characters, but it would definitely work.

A fantastic Paranormal Romance with lovable characters and steamy sex scenes, Claimed by a Demon King was a definite win. But what made it even better, was the incredible plot twists and action sequences to make it more than just a romance. And it ended perfectly – I’m happy with the resolution and yet enough is hanging that I cannot wait to read the next book in the Eternal Mates series!

*This book may be unsuitable for people under 17 years of age due to its use of sexual content, drug and alcohol use, and/or violence.*

I received this book for free from Author in exchange for an honest review. This does not affect my opinion of the book or the content of my review.