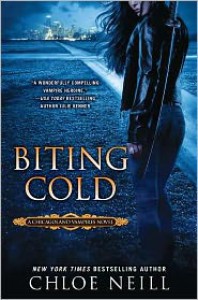 This review and others by Berls can also be found at Fantasy is More FunMy Initial Reaction...Biting Cold was a bit of a disappointment for me - it was frustrating and didn't live up to the others in the series until maybe the last third of the book.The Narration...The only thing in Biting Cold better than the earlier books in the series was the narration. Admittedly it took me a little bit to get used to Sophie Eastlake, but once I did it was so much better. She uses intonation and gives characters different voices (I actually know who's speaking now based entirely on voice!). She's still not my favorite narrator - I don't think she's managed to add to the characters and bring them off the page the way really great narrators do, but there's much more distinctive personalities than with Cynthia Holloway.The Characters...My biggest complaint about Biting Cold was Ethan. The man has freaking come back from the dead and still he has excuses for why he can't be with Merit? Seriously!?! If you're expecting an immediate connection between Ethan and Merit (like I was) you will be disappointed. In fact by the time they did reunite, even though I did enjoy it, I was over Ethan and quite frankly, I think I'd rather see her with Jonah. I just like him better at this point. I think I'm in the minority, but I just feel like Ethan and Merit's relationship is starting to feel forced, like they'll always be at odds. Things with Jonah seem like they could be so much more natural and easy. On the other side of that though is Ethan as master vampire - there are some really touching moments in this book with him and his vampires that endeared him to me.Merit is on an emotional roller coaster in this book - between Ethan's flimsy excuses and Mallory's having gone off the deep end; her closest relationships are tearing her up and I really felt for her. Despite her emotional distress, Merit is still kicking some serious ass as Sentinel and I thoroughly enjoyed the action scenes with her (in the last part of the book really).The variety of supporting characters in Biting Cold seemed much more important than they have in the past. Catcher, Jeff, Malory, Gabriel, Jonah, and even Tate made variously brief but incredibly important appearances, not to mention Page, a new character that I adore. We're getting to know them better and they are all growing as characters. For me, some of the best moments in Biting Cold were carried by the supporting characters, rather than Merit and Ethan.The Story...The pot of Biting Cold can be divided into two principle parts - the first, tracking down Mallory and trying to keep her from unleashing the evil in the Maleficium; the second - figuring out what Tate is and stopping him from whatever havoc he wants to unleash on Chicago. The bit involving Mallory was ridiculously familiar, at least to Buffy the Vampire Slayer fans. I felt like I was reading an abbreviated and adapted version of season 6&7 of Buffy, with the previous book being the season 6 and this being season 7. You've got a good friend (Mallory/Willow) getting too powerful for her own good and falling into black magic, with our heroine (Merit/Buffy) trying to stop her and get her back on the right path. Without adding spoilers, I'll also just say that the way they handle Mallory in the long run seemed pathetically ridiculous. The bit involving Tate, however, was not disappointing. There was mystery and it was action packed; this plot line really carried the book for me.I should also mention that events with the GP are continuing to develop along the same frustrating lines. The developments seem to fall to the background because of all the other obstacles in front of Merit, Ethan, and all of Cadogan House, but they are not minor and I expect they will be very important for the next book.Concluding Sentiments...Biting Cold doesn't live up to the other books in the Chicagoland Vampires series, but if you stick with it the last third of the book will excite you and leave you ready for the next, hopefully much better, book in the series.Get Biting Cold on Amazon
Tweet
576 BOOKS